Full Flight From Amsterdam To Barbados

– KLM’s inaugural flight to Barbados is already sold out –

Brussels, Belgium – As anticipation mounts over the first direct service from Amsterdam to Barbados in over 20 years, the inaugural KLM flight scheduled for Saturday, October 16, 2021 is already sold out.

KLM Royal Dutch Airlines was the first commercial airline to arrive in Barbados on October 19, 1938. Now, 83 years later, it is making history again by giving passengers the opportunity to fly directly to the English-speaking Caribbean island for the first time since the late 1990s.

Anita Nightingale, Director for Europe at the Barbados Tourism Marketing Inc. (BTMI), credited the new route’s success to the excitement over Barbados’ return to the roster. “Since KLM’s announcement of the new route earlier this year, we have seen a tremendous response due to the anticipation of there once again being a direct service to Barbados.

“Our team here in Brussels built on that excitement with aggressive sales and marketing activity including heavy trade communication such as recent 10-city sales missions by Debbie Moe, Senior Business Development Officer at the BTMI in Europe. We also engaged in heavy B2C marketing including advertising at Schiphol, online, and on RTL 4,” Nightingale said.

And the hard work has paid off. Positive load factors indicate a promising winter season for European business to Barbados. As one of the longest running airlines in the world, operating under its original name for 100 years, KLM is the largest long-haul carrier from Europe, serving 318 destinations in 118 countries and 80 code share partners. The new KLM service offers Barbados greater access and seamless connectivity to and from major European countries and regions such as the Netherlands, Belgium, France and Scandinavia, via Amsterdam Airport Schiphol in The Netherlands.

Flights will operate non-stop from Amsterdam to Barbados three days a week–Monday, Thursday and Saturday on KLM’s modern, efficient fleet of Airbus A330-200 with 264 seats in three classes including business. Departing Amsterdam at 12:25 p.m. CET and arriving at BGI 4:45 p.m. AST, the service will run until March 31st, 2022.

Bookings can be made directly at www.klm.com or through your preferred travel partner. 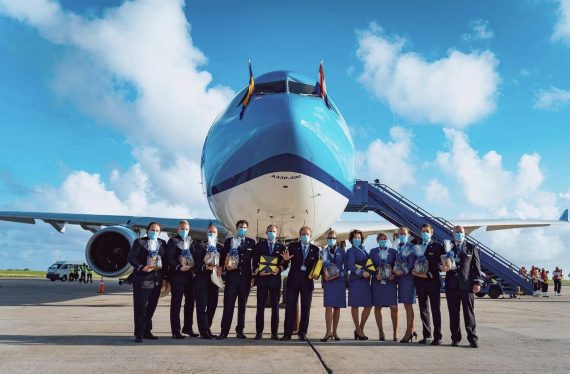