The 2023 Barbados Sailing Week will officially kick off on Saturday, January 14th.

Set to be the most inclusive edition, the list of events will include dinghy class races, kiteboarding, wing foiling and remote-control boat events.

Moving from three to eight days, the aim of the year’s event is to rebuild the momentum around sailing week and Barbados’ sailing community as a whole.

“With the kind of support from our partners, we can now really attract the kind of vessels that use to come in past. We can even go beyond that as Sailing Week has tremendous potential. I think we need to foster that, nourish that, and ensure that the marketing is done differently. This is the difference that will happen from this year going forward,” said Peter Griffith, OBE, Commodore of Barbados Cruising Club.

Speaking on the partnership with Barbados Cruising Club, Corey Garrett, Director of Caribbean and Latin America, Sports at the Barbados Tourism Marketing Inc (BTMI) stated “Sailors and all that they bring to the island definitely create an impact that we have recognized from an economic standpoint and also from an island-based standpoint. BTMI understands that sailing week has the potential to become a signature event as it has proven in the past to be one of the top Caribbean sailing events in the region.”

What is different about this edition is the separation of the youth events, to encourage more youth participation in the sport.

The junior dingy races will be held both before and after the Round House Race, which is the most anticipated event of the week.

Here is a Snapshot of the week of events: 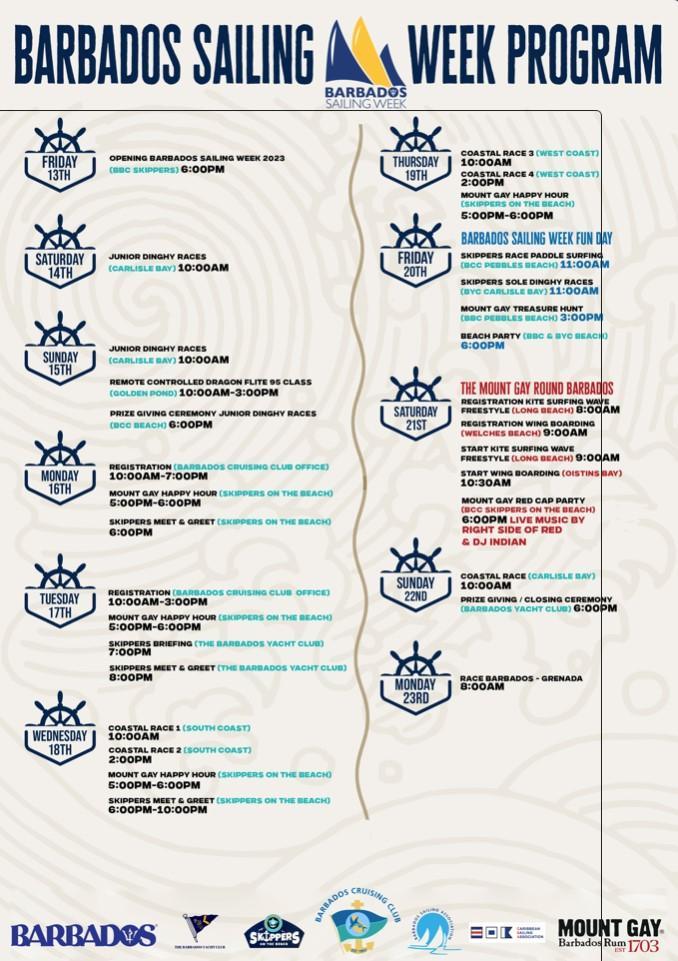 This year kiteboarding, wing foiling, and remote-control boat have been officially added to the week of events. The Kite and Wing Fest will take place on Saturday, January 21st and Sunday, January 22nd at Oistins Bay and Long Beach.

However, the highlight of the week is the legendary Mount Gay Rum Round Barbados Race. The race, which dates back to 1936, is held on January 21st to honour the first Prime Minister of Barbados, The Right Excellent Errol Walton Barrow. The Father of Independence was a sailing enthusiast and co-founded the Barbados Cruising Club.

The reigning champion of the Mount Gay Round Barbados is the Mod 70 vessel called ‘Miss Barbados’ which currently has a record of two hours and 37 minutes set in 2019. A total of 35 boats, 70 surfers and 400 to 500 skippers and crew are expected to participate.

Mount Gay Rum has sponsored the Round Barbados Race for over two decades as sailing is at the heart of its brand.

Laurent Coson, Global Brand Director at Mount Gay Distilleries stated “What we particularly enjoy at Mount Gay and what we want to highlight in this edition, is the chance to offer a very inclusive week, welcoming people from all over the world, young and less young, tourists, as well as Barbadians, kite surfers as well as sailors. The spirit of camaraderie will be shared all week long, not just 3 days or 5 days but 8 days with the Mount Gay Happy Hour.”

This year’s sailing week is the start of positioning the legendary week as the premier sailing event in the Caribbean. 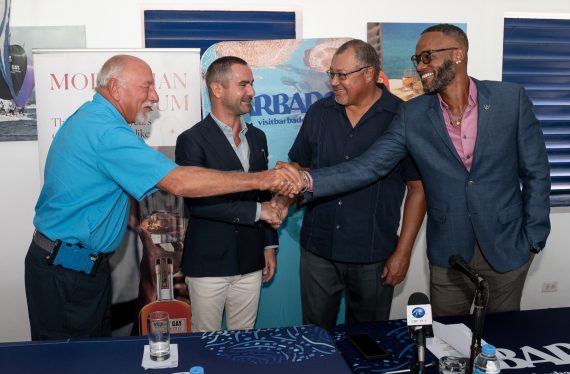